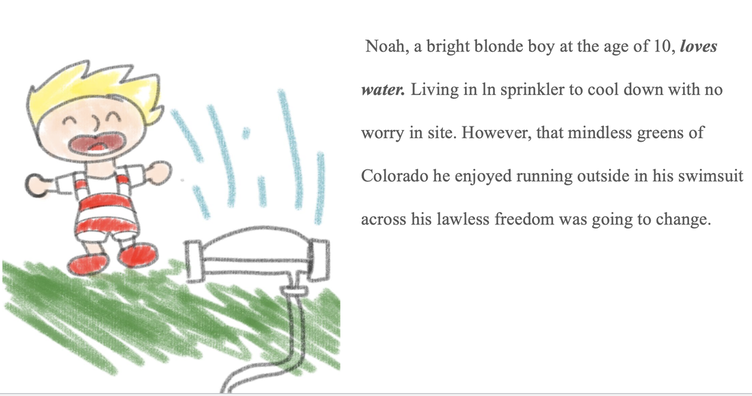 Poem - The Poisoned Necessity by Sean Goodwin, Fall 2020
Poison dripping down into its heart
Losing the very thing in which they gain their fame
Aquifers and wells drying up, and polluted all the same
Storm surges are filled with chemicals and trash
Corporations poison and diminish our necessary sup-ply, and at the same time, make all of their cash
Our  local  governments give  new  regulations,  to  prevent this from gaining traction further
But instead, the wells dry up, and the aquifers are murdered
Our crops will die off, providing no nutrition
Unless a plan is formed, to bring a positive future into fruition
This could be stopped, if more rules were to be put in place
But all around the world, places are losing the subterranean water supply, that flows with grace 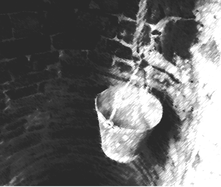 ​This is a bucket that is in an empty well.
I made this to show how some people obtain their source of water, and how it can be tak-en away if the supply diminishes too low.
If the person or people do not have the money to perform certain extentions into the well, their supply of water will be cut off. ​
Children's Book - Humans vs. Nature by Andrew Kraussman (View the PDF) Fall 2020 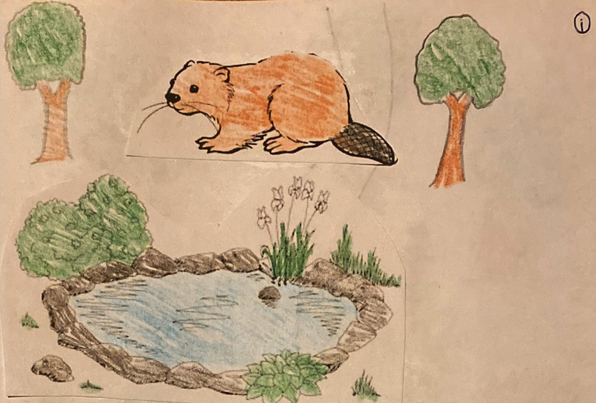 Short Story by Trixy Lemell, Fall 2020
They all were dying of thirst. A metallic taste of blood painted their lips and gums and with dry tongues they played with the gummy clumps that filled between the gaps of missing teeth and receding flesh. Lee watched the boys play their walking game, one with bendy bowlegs that sprang like spruce twigs with pressure and the other whose legs folded in on themselves as if he had drawn them, ankles and knees like L’s and Z’s, at the age of three.They held onto the metal chain link fence that reminded people of the black and brown faces locked away behind brick blocks and black bars of detention centers and mental hospitals. ForLee, they reminded him of when he was nine years old and watched the police beat a black man to death.

They looked on at the people who got out of the cars, they stared at their bloody smiles, their crooked legs, their eyeless faces and pity trembled on their bottom lips.Rain danced on the lips of the people, washing away the blood that filled so many of them red with anger. The rain drummed against car tops, settled into Lee’s afro hair, and danced with children who laughed with wide mouths that drank from the air.And Lee didn’t have the heart to tell them. To tell them of the water cycle, of the runoff,of the hurricane that swept not only through their area, collecting every contaminate along the way and dumping it into the next city. He didn’t have the heart to tell them that the water falling from the sky was just as contaminated as their own.

That the baby in the woman's arms across the street had no eyes, that the little girl with green eyes had legs that folded in on themselves, and that the people watching them had just seen into their future.The fissures of his hands burned but Lee ignored it. He thought about Clip and the boys along the fence, he thought about his own children and grandchildren and he wondered if they would ever forgive him. He listened to their laughter and the rain that chipped away at their minds and bodies with each thwack.

​Author's Note - ​I choose to write a short story in the genre of science fiction to show some of the effects of water contamination in regards to environmental inequality. My characters are low income and minorities who are living in areas in which the upper class and often white tend to place chemical plants, landfills and other water contaminations at. Because of this, minorities and poor often suffer the most from water contamination (Washington Post). The story also focuses on the water cycle and how contaminated water is able to reach other areas such as during hurricanes.  I used many sources to come up with my concept on minorities facing water contamination but much of my work is fiction.
3-D Model of the Water Table by Brianna Olive, Fall 2020

Song "Water" by Celine Pedro  (Very pretty but I can't get YouTube to accept this as an MP4.)
GIF - Water Table by Lawrence Randazzo, Fall 2020